Messages scrawled on a burned building criticized the Chinese presence in the Solomon Islands.Credit...

Damien Cave has been writing about Chinese influence in the Solomon Islands since 2019. He and Matthew Abbott spent about a week in the Solomons reporting this story.

Down a dirt road outside the Solomon Islands’ capital city, past Chinese construction projects and shops where Chinese merchants sell snacks, a tribal chief tried to explain what it feels like to have a rising superpower suddenly take an interest in a poor, forgotten place desperate for development.

“At first,” said the chief, Peter Kosemu, 50, as he sat in the shade on Guadalcanal, the largest of the Solomon Islands, “most people just wanted to see what was going on.”

He and many others have watched China rush headlong into seemingly every corner of the economy and politics of this South Pacific nation over the past three years, spurring fears in the West that Beijing is trying to set up an outpost that could play a strategic role in any future conflict with the United States and its allies.

China has opened a large embassy, started construction on a stadium complex and signed secretive deals with the government on security, aviation, telecommunications and more. Many islanders liken it to seeing carpenters waltz unannounced into your kitchen, drawing up plans, tearing down and building, with little explanation.

The longer it has gone on, the more curiosity about China’s big spending and lending has given way to concern and a simmering anger that comes from asking questions never answered. Workers at the stadium — including many who commute from where Mr. Kosemu lives — complain about unfulfilled promises on pay. Residents fret that the prime minister and Chinese officials are undermining democracy, as politicians who resisted China’s plans, or just asked tough questions, have reported that their rivals are suddenly flush with money and pro-China messages that the public is expected to simply accept.

“There’s no proper consultation with the people,” Mr. Kosemu said. “No one is happy about it.”

For years, Beijing has thrown its wealth across the globe to fuel its economy, gain geopolitical influence and blunt criticism. The Solomon Islands has been portrayed by Chinese state media as a model of what China’s international efforts can accomplish, suggesting an unstoppable march toward dominance by America’s main competitor.

“Chinese modernization offers humanity a new choice,” China’s leader, Xi Jinping, said at the Communist Party congress in late October, when he secured a third term and was beginning to re-engage China with the world after a Covid hiatus.

But in the Solomons, a nation of about 700,000 people and around 1,000 islands in the sea lanes between Australia and the United States, recent experience suggests there is a cost to Beijing’s confident, money-driven approach to expanding its power around the globe.

For many islanders, China is productive, yes, and attentive, but they see it less as a benign partner than as an imperious and corrupting force that raises the risk of conflict. 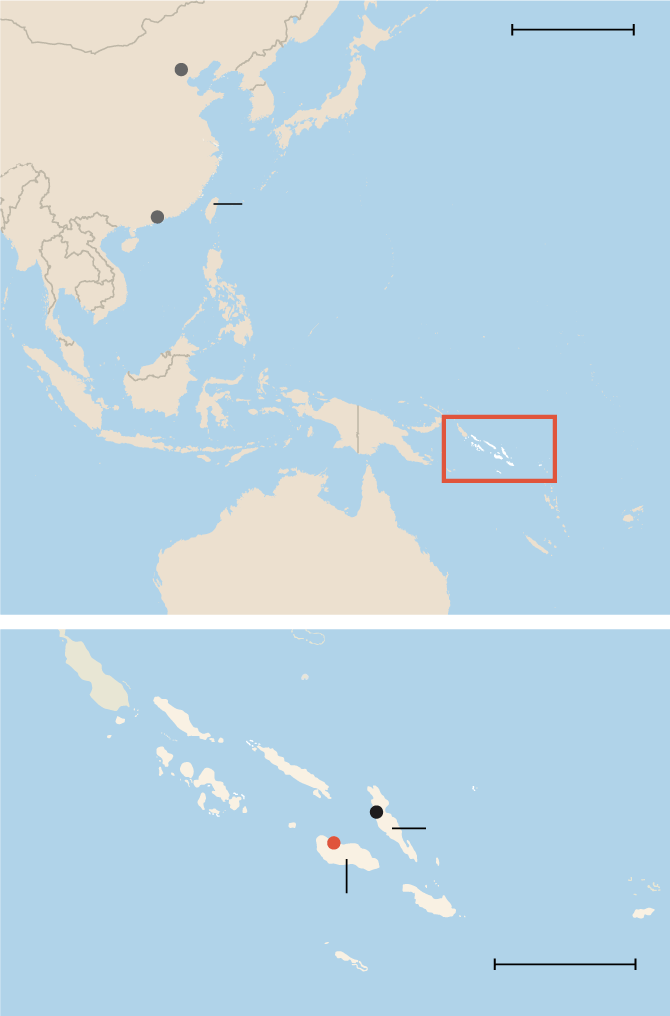 Anti-government riots led to the torching of Chinese businesses in November 2021. Among the protesters’ main concerns was the way that China’s influence seemed to tilt economic opportunity to politicians and places that were more willing to do Beijing’s bidding.

The government has shown no sign of changing course. In September, the Solomons delayed its 2023 national election, declaring it lacked the capacity to host in the same year both a vote and the Pacific Games, which will take place at the new stadium. As it has embraced Chinese technological infrastructure, the government has also taken on debt that the World Bank recently described as unsustainable.

Some American officials worry that China’s goal in the Solomons is to create a client state, securing deepwater ports and satellite communication sites. The country’s prime minister signed a security deal in April that gives China a right to send police officers or naval vessels to the country with few limitations.

As Beijing’s priorities have shifted from development to defense, fears of its strong-arm tactics are increasing. Surveys show negative views of China are soaring worldwide.

“China is much less successful than is commonly assumed,” said Audrye Wong, a political scientist at the University of Southern California. “They think paying off people is a quicker and more efficient way of achieving the things the Chinese government wants. The reality is it often creates a backlash and doesn’t work.”

‘They Don’t Understand Us’

Every evening just before 6 p.m., workers stream out of the stadium complex in the capital, Honiara, that is being built by a Chinese state-owned company with what officials have described as a generous $50 million grant from the Chinese government.

Signs out front boast of friendship, cooperation and safety in Chinese and English. But after work recently, at a food stand across the street, employees called all of that a lie.

“Everyone wants to strike because of the poor payment and lack of safety,” said Lenny Olea, 35, a driver. “We need to get this fixed.”

Mr. Olea said he was making $1.20 an hour less than what he used to make at a hotel, after promises of extra money for food and transportation never materialized. A dozen others said that they had received no safety training, and that their Chinese foremen communicated with hand gestures and hit them in the head if they got something wrong.

The Chinese Embassy denied a request by The New York Times to speak with the ambassador. The Chinese company, China Civil Engineering Construction Corporation, did not respond to emailed questions about the workers’ complaints.

Since the government of Prime Minister Manasseh Sogavare switched allegiance from Taiwan in 2019, saying it would aid the country’s development, more Chinese companies have set up in the Solomons. Islanders tell stories of warm interactions with Chinese merchants who migrated decades ago. But many complain that newer arrivals treat workers (and customers) like peons — owners often ring up sales from a platform that lets them tower over all who enter.

The premier of Malaita Province, Daniel Suidani, explained that he had welcomed projects from Japan and other countries but blocked attempts by China to do infrastructure work because he had not seen it add value elsewhere in the country. He said Chinese officials had worked with politicians in Parliament seeking to undermine him, funneling aid to their districts, rather than asking him about what the province needed.

That lack of consultation remains a source of frustration across the country.

The Solomons’ Indigenous roots include an abiding respect for dialogue. A broad conversation with the community is often required before major decisions are made.

China has operated with a more top-down approach. “What we have seen with the presence of China are pushy advisers,” said Celsius Talifilu, who worked for Mr. Sogavare until late 2019 and now works for Mr. Suidani.

In places like Burns Creek, where around 10,000 people — many from Malaita — have built homes in a grassy flood plain, the lack of transparency has fueled a slow gas leak of resentment.

“People stay quiet in this country until it reaches a climax they can’t accept,” said Joe Kelesi, 39, an elder at the Bethlehem Worship Center. “Until something sparks their disappointment.”

‘This Is State Capture’

Outside the Chinese Embassy, posters show splashy renderings of future projects and photos of Mr. Sogavare with Chinese officials. It has the feel of a movie theater marquee, with Mr. Sogavare as the star.

Volatile and charming, he has grown more defensive as he has become more intertwined with Chinese projects. He has told reporters there will be no Chinese military bases in the country, but after watching Chinese police train with Solomon Islands officers for the first time, he declared: “I feel safer.”

Leaked documents point to how the security agreement may have come together. Meeting minutes from the Sogavare government showed that, in August 2021, money from the Chinese government went to 39 of 50 members of Parliament from a “national development fund” previously financed by Taiwan — about $25,000 each.

A signed letter from Mr. Sogavare, 67, explained that the money had come from the Chinese Embassy.

Internal memos seen by The Times also identify another set of slightly larger Chinese payments that followed the unrest in November 2021, directed to those who had voted to keep Mr. Sogavare from losing a no-confidence vote.

Three months later, a draft of the security deal emerged.

In August, Mr. Sogavare also announced that a Chinese state-owned company, China Harbor Engineering Company, would build 161 cellular towers from Huawei, another Chinese company, with a $70 million loan from the Chinese government.

China Harbor’s offices are in the same green building as the Solomons’ Ministry of Foreign Affairs. Neither responded to requests for comment, nor did Mr. Sogavare’s office.

Opposition leaders accuse China of encouraging the election delay and mounting what they say has been a bribery campaign to keep allies in power. According to civil society groups, Chinese money has been used to buy laptops for Chinese propaganda videos displayed at community gatherings.

Peter Kenilorea Jr., the deputy opposition leader, said that two government officials had recently offered nearly $2 million to one of his father’s cousins to run against him; a little over a year ago, he added, another relative had been asked to run for about $750,000.

The dollar amounts were far above what he believed would be possible without Chinese cash.

And China continues to spend and give. A few months ago, the Chinese ambassador gave a new pickup truck with “China Aid” painted on the side to a small hospital’s psychiatric unit.

The United States and Australia have tried to counter Chinese influence. Australia will give more than $100 million in aid to the Solomon Islands this fiscal year. American military doctors also recently performed free surgeries alongside local doctors on an American hospital ship in Honiara’s harbor.

“China never does this kind of thing,” said Dr. Catherine Tirri, 40, as she observed a fistula surgery. “China doesn’t do service.”

A more skeptical question followed: Would there be any American follow-up? A plan to reopen a long-closed embassy has been caught up in red tape, limiting the U.S. presence to three diplomats (and a dog) living and working out of hotel rooms, with an interim embassy scheduled to open later this year.

In the meantime, Mr. Kosemu, the tribal chief, said frustration with China and its proxies keeps intensifying.

“The people have had enough of making requests to the government and being ignored,” he said. “Protests may be the only way to make them listen.”