Americas|Ecuador’s Death Toll During Outbreak Is Among the Worst in the World
https://www.nytimes.cf/2020/04/23/world/americas/ecuador-deaths-coronavirus.html

QUITO, Ecuador — With bodies abandoned on sidewalks, slumped in wheelchairs, packed into cardboard coffins and stacked by the hundreds in morgues, it is clear that Ecuador has been devastated by the coronavirus.

But the epidemic is even worse than many people in the country realize.

The death toll in Ecuador during the outbreak was 15 times higher than the official number of Covid-19 deaths reported by the government, according to an analysis of mortality data by The New York Times.

The numbers suggest that the South American country is suffering one of the worst outbreaks in the world.

The figures provide a dire indication of the damage the virus can do to developing countries, where it can quickly overwhelm health care systems and even the government’s ability to keep count of how many people are falling to the disease. 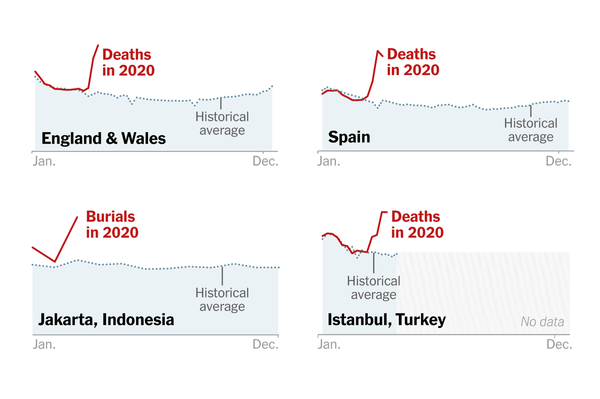 The Pandemic’s Hidden Toll: Half a Million Deaths

Far more people died in 2020 during the pandemic than have been officially reported, a review of mortality data in 35 countries shows.

“There were people dying at the doors of our clinics and we had no way of helping them,” said Marcelo Castillo, head of an intensive care unit in a private hospital. “Mothers, husbands, asking in tears for a bed, because, ‘You are a doctor, and you have to help us.’”

A staggering number of people — about 7,600 more this year — died in Ecuador from March 1 to April 15 than the average in recent years, according to an analysis of official death registration data by The Times.

That spike stands in stark contrast to the number of deaths that the government has officially attributed to the coronavirus: 503 people by April 15.

Mortality data in the middle of a pandemic is inexact, and it could change. The additional deaths include those from Covid-19, as well as from other causes, including people who could not be treated at hospitals inundated with coronavirus patients.

But the data points to an enormous, and sudden, increase in deaths. Three times the usual number of people died in Ecuador during the first two weeks of April, when the number of people falling ill reached a peak — an extraordinary rise that exceeds increases seen in similar data from Spain and the United Kingdom.

Ecuador’s beleaguered government, which is also dealing with its worst economic crisis in decades, acknowledged early in the outbreak that its official mortality figures fell far short of reality.

“We know that both the number of infections and the number of deaths are falling short,” Ecuador’s president, Lenín Moreno, said in a public address on April 2. “The reality always overtakes the number of tests and the speed of attention” of medical services, he said.

There has been a surge of infections in the province that includes Ecuador’s business capital, Guayaquil, where residents are thought to have brought the virus home after visiting Spain.

In Guayaquil, fatalities during the first two weeks of April were eight times higher than usual, the data indicates — a far greater rise than that of New York City, where fatalities were four times higher in recent weeks.

Within weeks of the first case being identified in Guayaquil, hospitals were overflowing and burial systems collapsed under overwhelming demand, leaving dead bodies to pile in the streets and pushing families to bury loved ones in coffins made of cardboard.

While the images shocked Latin America and the world, the true scale of the crisis has largely been obscured by the government’s limited ability to determine who has the virus, a situation exacerbated by global shortages of tests and other materials, said Cynthia Viteri, Guayaquil’s mayor.

“We will never know what the real number is, because there are no tests,” Ms. Viteri said.

In early April, the government created a task force to deal with the precipitous climb in the number of dead bodies that needed attention in Guayaquil. At the peak of the crisis, the team collected and authorized the burial of five times as many bodies than would normally be buried in the city on any given day.

The wave of deaths is all the more disturbing for being impossible to explain. There is no obvious reason for Ecuador to be devastated far more than other countries. Its population is relatively young, and most people live in rural areas, both factors that should reduce the risk, said Jenny Garcia, a demographer who studies Latin America at the Institut National d’Études Démographiques in France.

That mystery is reflected in the pandemic’s uneven consequences around the world, raising questions no one has been able to answer. Are some places just lucky? Do unknown local factors lead to dramatic differences?

Medical workers in Guayaquil and local residents who have lost their loved ones described the despair that washed over the city during the peak of the epidemic in early April. The virus spread through the usually bustling port city of three million with bewildering speed, hitting the plush suburban gated community of Samborondón and the working-class district of Febres Cordero particularly hard.

“I fall asleep with anxiety, not because I fear infection — I actually don’t think about it — but because of the overload,” said Dr. Castillo, who works in an intensive care unit in Samborondón.

In another city hospital, the Teodoro Maldonado Carbo, a doctor who did not want to give his name because he has been asked not to speak to the media, described what he said were scenes out of a horror film.

There were corpses in wheelchairs, in stretchers and on the floor in the emergency area, he said. The smell was such that the staff refused to enter.

Several of his colleagues fell sick and waited in wheelchairs for patients to die, hoping it would give them a chance to use a ventilator.

The spike in deaths caused chaos and anger outside hospitals and morgues, as grieving families struggled to recover the bodies of family members or to collect their death certificates. In the city’s poorer neighborhoods, some residents said they had to wait for up to six days in the 90-degree heat for emergency services to collect the bodies of deceased relatives and neighbors.

Darío Figueroa, a handyman, said he dressed in a homemade protective suit made of garbage bags and spent nearly 12 hours searching for his mother’s body in the overflowing morgue of Guayaquil’s Guasmo Sur hospital in late March.

There were hundreds of decomposing bodies stacked in piles, he said, as if they were sacks of potatoes or rice.

Mr. Figueroa said he finally buried his mother five days after her death from respiratory symptoms. She died on arrival to the hospital without being tested for the virus.

A national lockdown ordered by the government in mid-March appears to be bearing fruit, as official infection rates have stabilized. Deaths also fell sharply in Guayaquil last week. Official figures show 128 died on April 15 in Guayas, the province that includes Guayaquil. That’s down from 614 on April 1.

Despite the respite, Mr. Moreno, the president, said the country is facing one of its toughest moments in its 200-year history, as the economic cost of the pandemic has been compounded by the collapse of export revenues, ruptures in the country’s main oil pipelines and massive foreign debt payments.

He is now facing a tough choice between keeping a paralyzed economy shuttered longer, or risking a resurgence of the virus.

Under pressure from business groups, Mr. Moreno said this week he’s considering relaxing the lockdown and allowing some industries to go back to work. The news was greeted with anxiety in Guayaquil, where many residents are torn between a desire to return to work and fear of reliving the chaos of the past weeks.

“The pandemic is not over,” said Gina Mendoza, a Guayaquil nurse who has recently recovered from coronavirus. “We are scared of what could happen.”