Americas|As Bodies Accumulate, So Do Fears of a High Coronavirus Toll in Ecuador
https://www.nytimes.cf/2020/04/14/world/americas/coronavirus-Ecuador-guayaquil.html

QUITO, Ecuador — Guayaquil, Ecuador’s business capital, has been the site of Latin America’s most aggressive outbreak of coronavirus, overwhelming its hospitals and burial system and causing bodies to be left in the streets.

Now, as authorities begin to grapple with the scale of the crisis, they have reason to believe that the toll for the province that includes Guayaquil is likely many times larger than the official government figure of 173 dead. The numbers are skewed because only those who test positive — dead or alive — are counted as coronavirus victims.

The usually bustling port city of about three million had about 1,500 more deaths in March than it did in the same month in 2019, Guayaquil’s mayor, Cynthia Viteri, said in an interview Monday. 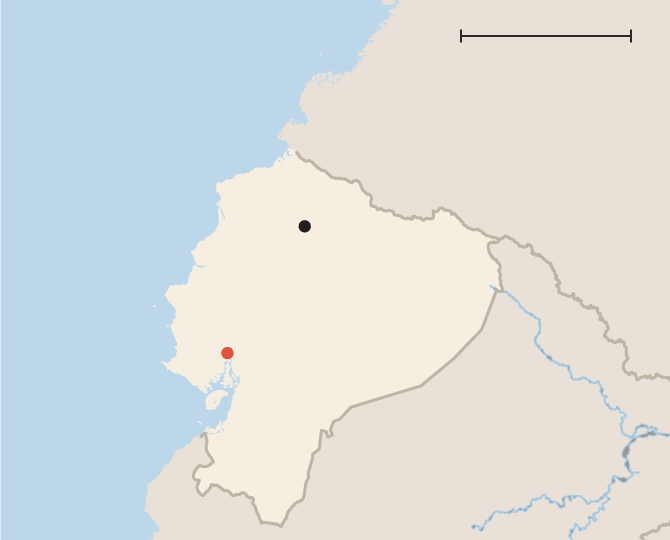 The swelling mortality offers a glimpse at the full cost of the virus, underlining both the pitfalls of limited testing and the burden it has placed on an overstretched health care system, Ms. Viteri said.

“They are not only dying from Covid,” she said, using the name of the virus-borne disease. “People with diabetes, hypertension, heart disease are dying from lack of medical attention, because the hospitals are saturated with the critically ill, because there aren’t places where women can give birth without getting infected.”

In the past two weeks, the government’s emergency team collected or authorized the burial of nearly 1,900 bodies from Guayaquil’s hospitals and homes — a fivefold increase in the city’s usual rate, according to Ecuador’s government.

To combat the spread of the virus, the city is resorting to some of the strictest quarantine measures in Latin America.

Security forces on Tuesday began cordoning off contagion hot spots for up to three days at a time while medics looked door to door for potential cases and sanitary workers disinfected public spaces.

Ms. Viteri, the mayor, said movement to and from the hard-hit neighborhoods, located mostly in the city’s poor periphery, will be completely cut off. City authorities will provide residents with food while the operation lasts.

Compliance with the lockdown measures in Guayaquil has been patchy until now because many of the city’s poor continued going to work or looking for food.

Ms. Viteri said she had to resort to tough lockdown measures and door-to-door checks because of severe shortages of test kits and other medical materials.

The most recent batch of test kits, ordered by the city last month, will not arrive until mid-May — too late to make a difference for many who will get sick, she said.

The relatively late arrival of coronavirus in Latin America has put the region last in line for critical medical supplies, whose stocks are being depleted by nations fighting a more advanced stage of contagion.

The World Health Organization said it will send 1.5 million additional coronavirus test kits to nations in North and South America next week.

“We’re doing everything within our possibilities, given the complexity of the current market,” to provide Latin American countries with critical supplies, Dr. Sylvain Aldighieri, the organization’s regional emergency response manager, told reporters Tuesday.

Ecuador’s response to the coronavirus is complicated by a deteriorating economy. The International Monetary Fund forecasts the country will see the deepest recession in the continent this year, after Venezuela.

The outlook worsened last week, when mudslides damaged Ecuador’s two main oil pipelines, shutting off most of its crude exports for weeks. The outage deprived the country of its biggest source of revenue at a crucial moment and polluted several rivers used by Indigenous communities.

Facing default, the government has unveiled an ambitious fund-raising plan that includes new taxes on individuals and companies and a 50 percent salary cut for top government officials.

The $800 million the government hopes to raise from the plan, however, is a fraction of the $4.3 billion in oil revenues the country is expected to lose this year because of the falling oil prices and tax revenues — not to mention the billions in losses that economists expect will follow from quarantine measures to fight the pandemic.