Asia Pacific|‘Muslims Are Foreigners’: Inside India’s Campaign to Decide Who Is a Citizen
https://www.nytimes.cf/2020/04/04/world/asia/india-modi-citizenship-muslims-assam.html

JORHAT, India — For nearly two years, Mamoni Rajkumari, a lawyer, spent her days deciding who was an Indian citizen and who was not, as part of a tribunal reviewing suspected foreigners in the state of Assam. Then, she says, she was dismissed for not declaring enough Muslims to be noncitizens.

Ms. Rajkumari, 54, has found herself on the front line of India’s citizenship wars. In addition to the tribunals, which Assam has operated for decades, the state has also recently completed a broader, separate review of every resident’s paperwork to determine if they were citizens.

That review found that nearly two million of Assam’s 33 million residents, many of them desperately poor, were possibly foreigners. Now this group — which is disproportionately Muslim — is potentially stateless.

What’s happening in Assam is a preview of what may be coming to India as a whole as Prime Minister Narendra Modi tries to pull the country away from its foundation as a secular, multicultural nation and turn it into a more overtly Hindu state. 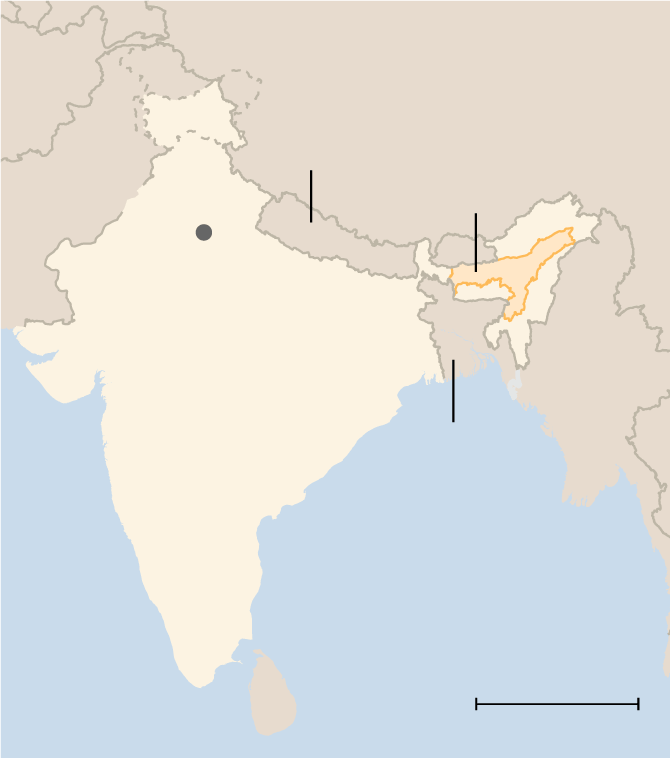 The New York Times interviewed one current and five former members of the Assam tribunals that review suspected foreigners. The five former members said they had felt pressured by the government to declare Muslims to be noncitizens. Three of them, including Ms. Rajkumari, said they were fired because they did not do so.

Mr. Modi’s Bharatiya Janata Party has its roots in a Hindu nationalist worldview, and during last year’s national elections, party leaders vowed to apply the same type of citizenship checks used in Assam to the rest of India. Mr. Modi has recently denied he has any such plans.

Like Assam, India is majority Hindu, with a large Muslim minority. In December, India’s national government passed a sweeping new immigration law that gives a fast track to citizenship for undocumented migrants from nearby countries as long as they are Hindu or one of five other religions. Muslims are excluded.

The upshot is that any Hindus left off Assam’s citizenship lists after its broad review, or declared by tribunals to be foreigners, will likely be affirmed as citizens because of the new immigration law. Muslims may not.

“Increasingly, it is looking like Muslims are becoming a target,” said Binod Khadria, an expert on migration who is a former professor at the Jawaharlal Nehru University in New Delhi. “It’s a charged situation.”

Even before the citizenship review, an indigenous rights movement in Assam, in northeast India on the border of Bangladesh, had been agitating for the government to expel foreigners.

The police — sometimes acting on reports from private citizens — had referred more than 433,000 residents as “suspected foreigners,” according to parliamentary documents, and sent them to tribunals like the one Ms. Rajkumari sat on to produce documents or witnesses to prove they are truly Indian.

The whole tribunal process has troubled Ms. Rajkumari and some others who have served as tribunal members, generally hearing cases on their own.

Many poor Indians lack the required paperwork to prove citizenship, like parents’ voting records and land ownership documents that have been certified by authorities as authentic.

What’s more, the choice of who is labeled a suspected foreigner seems to have a religious bias to it, with a much higher percentage of Muslims sent to the tribunals than Hindus, according to Ms. Rajkumari and the tribunal members interviewed. Some of those current and former tribunal members spoke on condition of anonymity because they feared reprisals from the government.

Although the tribunals are not technically courts, they function as if they were. If they find that someone cannot prove his or her citizenship, that person can be sent to detention, often within a jail.

Kartik Roy, a lawyer and another former tribunal member, said “most of the references’’ that police officers made to his tribunal to investigate suspected foreigners “were against Muslims.”

Learn more about our process.

Some of the tribunal members interviewed said they felt pressure in general to find more “foreigners,” with a monthly requirement to report how many cases they had heard and of those, how many people had been declared foreigners.

Two other former members said officials in Assam’s Home and Political Department, which from 2016 has been controlled by Mr. Modi’s political party, had complained that they were not declaring enough people noncitizens.

The former tribunal members said the complaints relayed to them were a form of indirect but heavy pressure.

Tribunal members who declared more people foreigners had their performance rated as “good,” which increased their chances of keeping their jobs, according to court documents viewed by The Times. The performance of those who didn’t declare enough people foreigners was marked as “not satisfactory.”

Both Ms. Rajkumari’s and Mr. Roy’s names appeared on that review list with a note against their names, saying they “may be terminated.”

That is exactly what happened. The terms of Ms. Rajkumari and Mr. Roy were not renewed in 2017.

They both said that because the bulk of people in front of the tribunals were Muslims, the expectation was that they would declare Muslims as foreigners, paving the way to deport them, incarcerate them or take away fundamental rights.

The director general of police in Assam and other state officials declined to comment.

Mr. Modi and top officials in his party have denied targeting Muslims in the Assam citizenship check, saying it was meant purely to identify illegal migrants.

The Home Ministry in New Delhi, which ultimately oversees citizenship and residency rules in India, also declined to comment, citing the demands of the coronavirus crisis.

Most of the migrants in Assam came from Bangladesh, at one time or another. Many have lived in Assam for generations, the descendants of economic migrants from decades ago.

And many are illiterate and poor, often with no idea how to read the papers vital to proving a citizenship claim, and keeping them out of jail.

Bangladesh, a predominantly Muslim country, and one of the poorest and most densely populated nations in the world, has expressed zero enthusiasm in taking migrants back.

The passage of the national citizenship law sparked protests in Assam and across the country, and they continued to flare up until Mr. Modi imposed a coronavirus lockdown across India in late March.

Dozens of people in Assam whose citizenship has been questioned have killed themselves, according to Indian media reports. Countless others fear being expelled from India or thrown in jail.

Mr. Modi’s government doesn’t seem to be devising any plans to deport millions of people.

But it is expanding its capacity to incarcerate foreigners; an enormous detention facility is under construction in the Goalpara district of Assam, where up to 3,000 people are likely to be held.

The compound, set to open in a few months, has thick, high walls on the periphery, watchtowers in every corner, separate sections for men and women, and an infirmary.

In July 2017, Ms. Rajkumari, Mr. Roy and 12 other former tribunal members sued the government for wrongful dismissal, disputing the government’s rating of their work. They lost the case.

Ms. Rajkumari, who continues to practice law, said that what the government pressured her to do was wrong. A few weeks before she was fired, she recalled, she visited her mother.

“Ma, how will I accomplish this task?” Ms. Rajkumari remembered asking her, tears streaming down her face. “Because it is very illegal.”